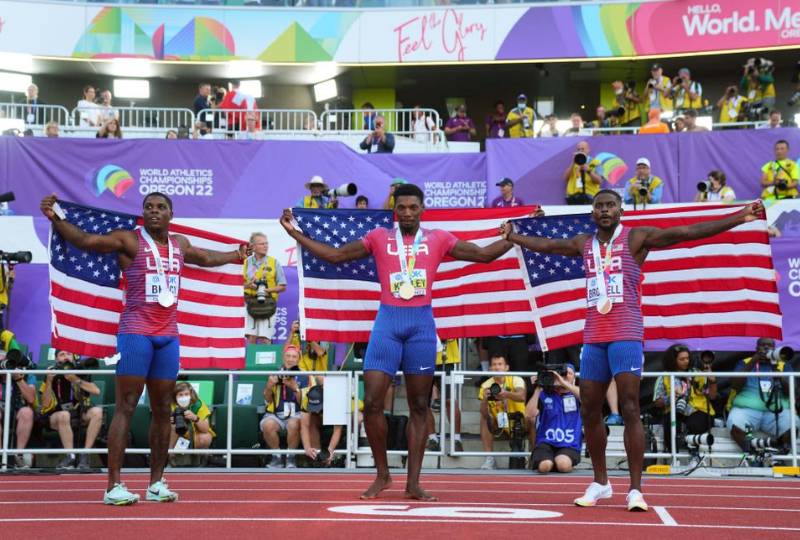 FILE PHOTO: Gold medallist Fred Kerley of the US celebrates after winning the men's 100 metres final alongside silver medallist Marvin Bracy of the US and bronze medallist Trayvon Bromell of the US. Reuters Photo.

EUGENE: Fred Kerleyled an American clean sweep in the 100 metres final on Saturday, the first since 1991, to send the home fans wild and give the sport's dominant nation a night to remember as they hosted the World Championships for the first time.

Kerley timed his dip perfectly to clock 9.86 seconds as Marvin Bracy took silver and Trayvon Bromell bronze, both with 9.88 seconds, but Bracy edging it by two thousandths of a second.

Carl Lewis led clean sweeps in 1983 and 1991 but no nation has managed it since.

There was nothing between the medallists once they were into their running, and with Bromell out in lane eight and the other two side-by-side in three and four it was an impossible finish to call.

As each name, alongside the Stars and Stripes, appeared on the giant screen, the home crowd increased the volume of their cheers, greeting confirmation of the 1-2-3 with a chant of "USA".

That would have been more impressive had the 12,500 capacity stadium been anywhere near full on what should be the biggest night of the championships. The empty seats will be a huge disappointment for the organisers and World Athletics.

Kerley, of course, was not in the slightest bit worried about that. "I said we were going to do it and we did it - USA, baby," he said in a trackside interview.

Olympic silver medallist Kerley was the form runner in the field. He posted the year's leading time and a personal best of 9.76 on the same Eugene track when winning the US trials last month, and his 9.79 on Friday was the fastest-ever world championships heat time.

"I lost the Olympics by (0.04). I saw Bracy in front of me, he dipped early and I picked the right time and got the job done today," he said.

"I got the work done this time around and the gold medal means more than anything," said Kerley.

"It's amazing to do it on home soil with the home crowd behind us. It's a wonderful blessing to get a clean sweep. I feel we can dominate again at (next year's) World Championships."

For Bromell, second-fastest in the world this year, the bronze was some sort of consolation after the Tokyo Olympics, where he failed to make the final after entering the Games as favourite.

"My mind is a lot stronger this year. And I knew what I was missing that now I expect more from myself," he told Reuters.

"I got hurt and I was out of sport for so long, and then came back and happened to just come back during the biggest time of the year, the Olympics ... it is good to come out here and get it done."

Jamaican Oblique Seville, the fastest of the semi-final qualifiers, finished fourth in 9.97, while Italy's Olympic champion Lamont Jacobs withdrew before the semi-finals due to injury.