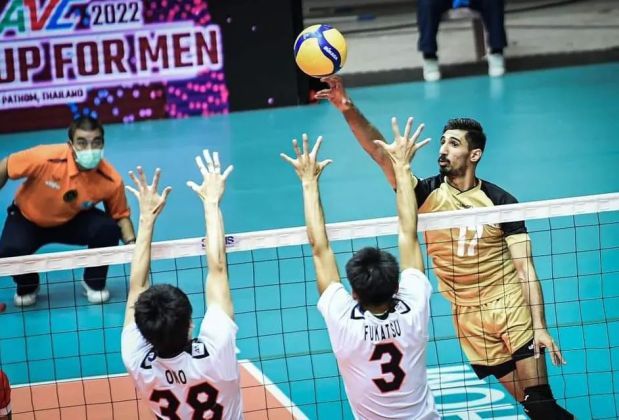 Bahrain’s fairy-tale debut run in the 2022 Asian Volleyball Confederation (AVC) Cup for Men was cut short yesterday by Japan, who prevailed 3-0 over the kingdom’s team in the first semi-final in Nakhon Pathom, Thailand.

Having set the tournament alight with their dazzling performances in the preliminary and main rounds – where they won three games and lost only one – Bahrain, ranked 11th in Asia, went down battling against their opponents, who are second in the Asian rankings, 25-27, 15-25 and 20-25.

Despite the obvious fatigue players from both teams must have been experiencing – this was the third game in as many days for each side – the match was a high-intensity affair and, despite the score-line, which would suggest a one-sided contest, Bahrain tested Japan to the limit in the first two sets before entering the third, 0-2 down and needing to win it to keep themselves in the fray.

They started well, matching the Japanese point-for-point and refusing to let their opponents build up too big a lead. But Japan’s outside hitter, Tomita Shoma was on song and with middle blocker Ono Haruki providing him admirable support, the Japanese had built up a four-point lead at 21-17.

Bahrain head coach Issanaye Ramiress Ferraz shuffled his line-up constantly to try and catch up with Japan but the points gap between the two teams continued to widen. Before long, the Japanese had taken the set, 25-20, and the game, 3-0.

Earlier, Bahrain had overtaken a 5-0 lead by Japan in the first few minutes of the first set before seeing their opponents draw level again at 7-7. With outside hitters Naser Anan and Mohamed Abdulla launching spectacular attacks from both wings, Bahrain kept pace with the Japanese and equalised for the fourth time at 18-18.

The battle continued neck-and-neck as the score inched to 24-24. Japan thought they had the set wrapped up when they made it 25-24 with just another point required to make it 1-0.

But Bahrain swiftly made it 25-25. Shoma, then, fired a magnificent spike to put Japan ahead, 26-25, and, shortly thereafter, when an Abdulla spike went wide, the Japanese had taken the first set, 27-25.

Having built up some momentum, Japan took a three-point lead early in the second set, at 6-3, and surged ahead to 18-12 with outside hitter, Higuchi Yuki, joining Shoma in repeatedly penetrating the Bahraini defence.

Soon, despite Bahrain’s commendable resistance, Japan had won the second set, 25-15, and were leading 2-0 with a berth in the final just one set away.

Japan will now play China, who defeated South Korea 3-2 in a five-set thriller in the other semi-final, in the final today. The match is scheduled to start at 2pm, Bahrain time.

Bahrain, meanwhile, will battle South Korea in a third-place play-off, also today. The match will begin at 11am, Bahrain time.