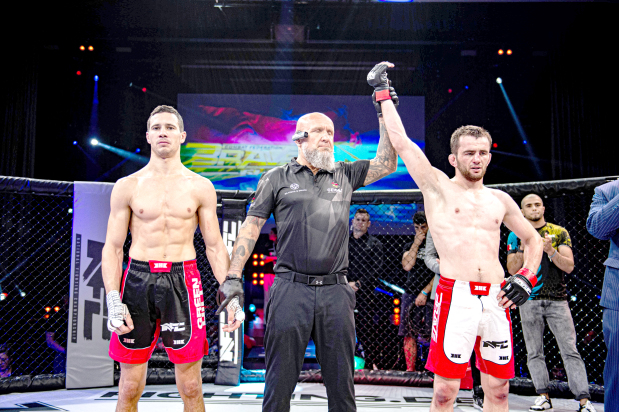 Magomedov once again proved his dominance in bantamweight

BRAVE CF 61 left matchmakers in a pickle with all the outstanding fights on display at the first-ever German BRAVE CF event on Saturday.

Down at the Maritim Hotel in Bonn, a handful of fighters showcased their mettle and talent and three of them made their intentions known in their post-fight interviews calling out for title shots in their respective divisions.

On the prelim card, South Africa’s Chad Hanekom (8-2) handled the adversity of a late opponent change with poise to grind out a hard-fought unanimous decision win over Poland’s Mateusz Janur (5-5) in their 89-kg catchweight bout after his original opponent, Italy’s Enrico Cortese (8-3 1 No Contest), was forced out of their middleweight bout.

“I had nothing to lose and everything to gain. And I’ve done it. I cemented myself as the number one contender again, fighting for the vacant Middleweight belt at the end of the year” said Hanekom, who

“I’m the number one contender right now, and In Jae La had a good win against Mzwandile (Hlongwa), so he’s on a win streak at the moment. I’d love to fight him at the end of the year for the vacant belt’’.

In one of the first fights on the main card, amateur world champion Gamzat Magomedov once again proved his dominance in the bantamweight division after he put on a grappling and wrestling clinic against Serbia’s Borislav Nikolic securing a unanimous decision (29-28, 30-27, 30-27) victory before pleading with the BRAVE CF braintrust to give him a shot at the BRAVE CF bantamweight title.

In the main event of the night, German-Brazilian Joilton Lutterbach put the super lightweight division on notice when he made it 2-0 against former rival, Germany’s Marcel Grabinski via a brutal technical knockout in the first round. A win over Lutterbach would have almost guaranteed Grabinski a shot at the title, but Lutterbach had other plans proving that he is more than just a replacement for Belarusian Vadim Kutsyi (16-1).

After the fight, Lutterbach looked into the broadcast camera lense and sent a definitive message to the BRAVE CF Super Lightweight champion, Bahrain’s Eldar Eldarov (13-1). “Eldar Eldarov … I want you. I am coming for you,” said Lutterbach who signed a long-term deal with BRAVE CF prior to his main event appearance.

After taking the Grabinski fight on short notice, Lutterbach stated that his only wish is that he gets a proper and full training camp prior to facing Eldarov who is already a wanted man with various targets on his back.