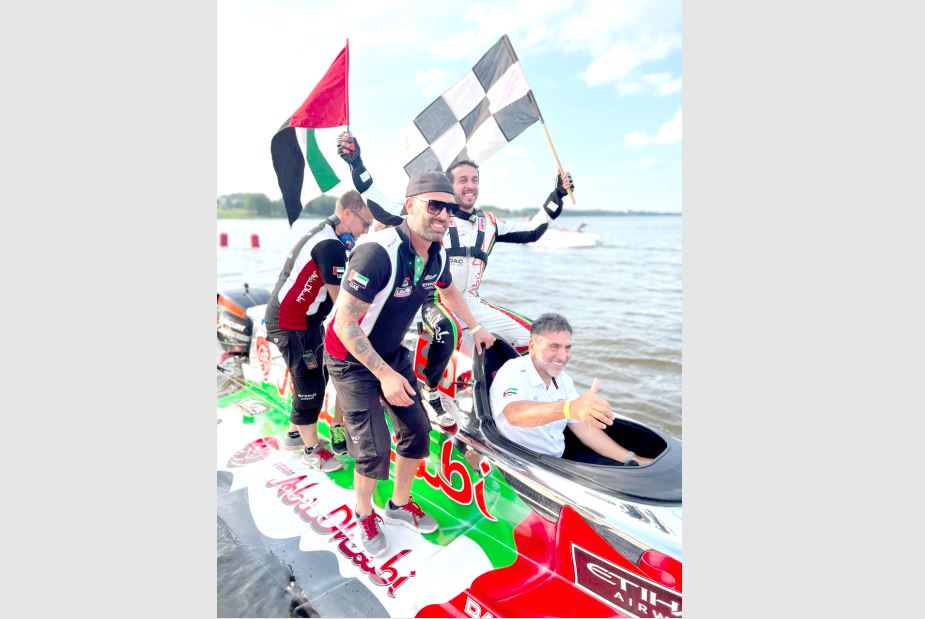 Kupiškis: Team Abu Dhabi’s Mansoor Al Mansoori powered his way into the lead in the 2022 UIM F2 World Championship with a commanding victory in the Grand Prix of Lithuania.

It was a mature and impressive display from the Emirati driver who has gradually grown in confidence since joining Team Abu Dhabi last season.

The result more than made up for Al Mansoori’s disappointment in Lithuania last year when he was force out of the race after being rammed from behind while chasing a podium finish.

“I’m very happy, and I want to thank my team for all the hard work they put in to make this happen,” he said. before leaping from the pontoon into the water to celebrate his success.

After problems in qualifying led to him starting the second round of the 2022 season in 7th place, team-mate and reigning world champion, Rashed Al Qemzi, claimed sixth position.

It might have been a lot better for Al Qemzi but for an incident which brought the race to a temporary halt on the first lap after he had started superbly.

Al Mansoori, who admitted to feeling pre-race nerves, showed no signs of that as he made a perfect start to reach the first turn in the lead.

Al Qemzi also got off to a flyer, and was quickly up to fourth before losing the three places he had gained when a collision between Swedes Johan Österberg and Bimba Sjöholm brought out a yellow flag.

With Österberg flipping and going out immediately, and Sjöholm exiting after the restart, Al Mansoori continued to lead comfortably from Seliö.

He drove flawlessly through the 45 laps as he recorded a victory which gives him an eight-point world championship lead from first round winner, Germany’s Stefan Hagin, who finished fifth on the day.