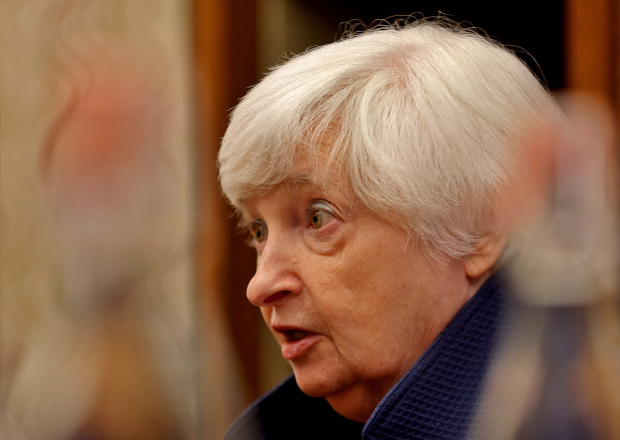 NEW DELHI: The United States is happy for India to continue buying as much Russian oil as it wants, including at prices above a G7-imposed price cap mechanism, if it steers clear of Western insurance, finance and maritime services bound by the cap, US Treasury Secretary Janet Yellen said on Friday.

The cap would still drive global oil prices lower while curbing Russia's revenues, Yellen said in an interview with Reuters on the sidelines of a conference on deepening U.S.-Indian economic ties. Russia will not be able to sell as much oil as it does now once the European Union halts imports without resorting to the capped price or significant discounts from current prices, Yellen added.

"Russia is going to find it very difficult to continue shipping as much oil as they have done when the EU stops buying Russian oil," Yellen said. "They're going to be heavily in search of buyers. And many buyers are reliant on Western services."

India is now Russia's largest oil customer other than China.

Final details of the price cap to be imposed by wealthy G7 democracies and Australia are still coming together ahead of a Dec. 5 deadline.

The existence of the cap would give India, China and other major buyers of Russian crude leverage to push down the price they pay to Moscow, Yellen said. Russian oil "is going to be selling at bargain prices and we're happy to have India get that bargain or Africa or China. It's fine," Yellen added.

Yellen told Reuters that India and private Indian oil companies "can also purchase oil at any price they want as long as they don't use these Western services and they find other services. And either way is fine."

The cap is intended to cut Russia's oil revenues while keeping Russian crude on the market by denying insurance, maritime services and finance provided by the Western allies for tanker cargoes priced above a fixed dollar-per barrel cap. A historical Russian Urals crude average of $63-64 a barrel could form an upper limit.

The cap is a concept promoted by the United States since the EU first laid out plans in May for an embargo on Russian oil to punish Moscow for its invasion of Ukraine.

Yellen's remarks were made after India's foreign minister said last week that his country would continue to buy Russian crude because it benefits India.

India's finance and energy ministries were not available for comment on Yellen's remarks, but other officials have said they were wary of the untested price cap mechanism.

"I do not think we will follow the price cap mechanism, and we have communicated that to the countries. We believe most countries are comfortable with it and it is in no one's case that Russian oil should go offline," one Indian government official told Reuters, speaking on condition of anonymity.

The official added that stable supplies and prices are most important.

Rosneft, Russia's largest oil exporter, is expanding its tanker charter business to avoid its buyers having to find tankers, insurance or other services as the price cap.

Yellen said that even with Russian tankers, Chinese tankers and a "shadow" fleet of older, decommissioned tankers and re-flagged vessels, "I just think they will find it very difficult to sell all the oil that they have been selling without a reasonable price."