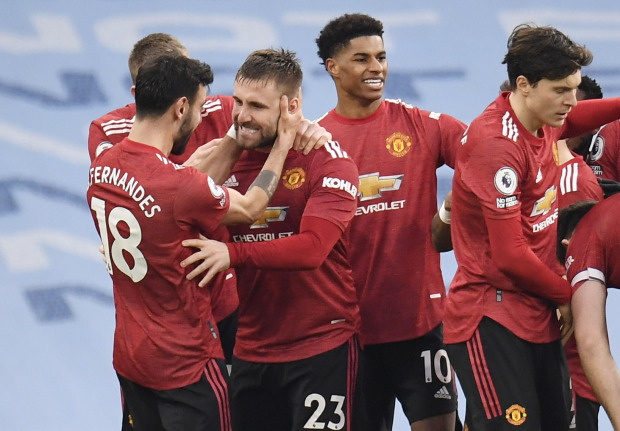 The result narrows City's lead over United at the top of the table to 11 points with 10 games remaining and was City's first defeat in all competitions since Nov. 21.

City were stunned after just 34 seconds when referee Anthony Taylor pointed to the penalty spot after Gabriel Jesus brought down Anthony Martial just inside the box.

Bruno Fernandes took the penalty with Ederson getting his right hand to the shot which squeezed in the corner to give the visitors the lead.

Luke Shaw had a great chance to double their advantage shortly after the opener but the fullback shot straight at Ederson from a good position in the box.

City had an appeal for a penalty turned down when Raheem Sterling tangled with Fred in the area and Riyad Mahrez went close just before the break.

United, tactically and defensively solid throughout, doubled their lead when keeper Dean Henderson threw a clever and fast ball out to Shaw who burst past two City defenders and after a swift exchange with Marcus Rashford, drove into the bottom far-corner.