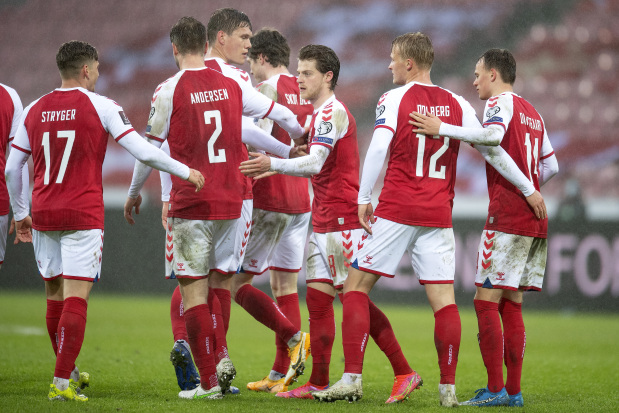 Herning, Denmark: Denmark turned on the style as they thrashed hapless Moldova 8-0 in their World Cup qualifier on Sunday to top Group F, with Kasper Dolberg and Mikkel Damsgaard both scoring twice against the nation ranked 177th in the world.

Coach Kasper Hjulmand made 10 changes from the Danish side that defeated Israel 2-0 away in their opening qualifier as only goalkeeper Kasper Schmeichel remained in the team, but it made little difference as they quickly dismantled the visitors.

The Danes went ahead in the 19th minute when Moldova midfielder Catalin Carp pulled down Joachim Andersen and Dolberg sent the penalty low to goalkeeper Stanislav Namasco's right.

Three minutes later they were two goals up when some dreadful Moldovan defending allowed Andreas Skov Olsen to cut in from the right and set up Damsgaard to poke the ball home, and the winger netted his second seven minutes later.

Fullback Jens Stryger Larsen added a fourth, cutting in from the right before curling the ball int the net with his left foot and Mattias Jensen made it 5-0 six minutes before the break.

Dolberg headed his second early in the second half before substitutes Robert Skov and Marcus Ingvartsen rounded off the scoring to leave the Danes top on six points, with the rest of the group due to play their second games later on Sunday.

Moldova have one point from their first two matches.