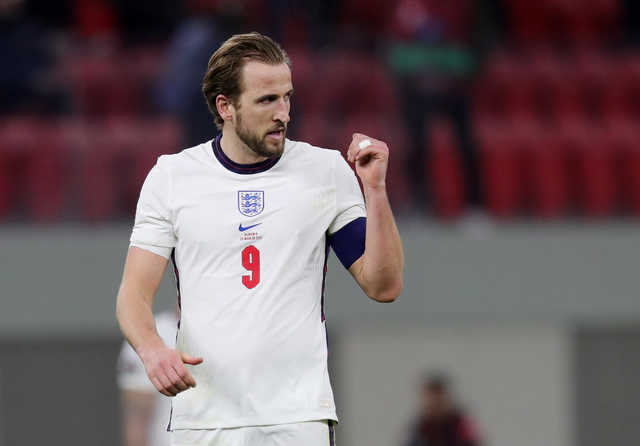 TIRANA: Harry Kane scored his first England goal since 2019 to lead his side to a comfortable 2-0 win against Albania in a World Cup qualifier yesterday to top Group I.

Albania initially made things difficult for England but once skipper Kane headed home in the 38th minute for his 33rd goal for his country it was a relatively straightforward assignment for Gareth Southgate’s team.

Kane also hit the woodwork, as did Phil Foden, before midfielder Mason Mount doubled England’s lead just past the hour mark with a deft finish from Kane’s pass.

Albania were left to rue an early chance squandered by Myrto Uzuni, after which they rarely threatened an England side who followed up their 5-0 rout of San Marino on Thursday with a sure-footed display against much stiffer opposition. They top the standings with six points from two games ahead of their home clash with most-likely group rivals Poland at Wembley on Wednesday.

Albania have three points following their victory over Andorra in midweek.

Meanwhile, Ousmane Dembele inspired France to a 2-0 victory over Kazakhstan in their second match in Group D.

Four days after being held 1-1 by Ukraine at the Stade de France, the world champions built their win in the first half with Sergiy Maliy’s own goal adding to Dembele’s opener before Kylian Mbappe missed a second-half penalty.

France moved top of the standings with four points, ahead of Bosnia, who they face away on Wednesday, Ukraine and Finland. Kazakhstan have zero points after playing their first game of the campaign.

Germany maintained their perfect start in qualifying after an early Serge Gnabry goal gave them a 1-0 win over Romania in Group J although they missed a string of chances against the home side.

The result left the Germans top of the group on six points from two games ahead of Armenia on goal difference before their next match at home to North Macedonia on Wednesday.

Gnabry scored a 17th-minute winner as he swept the ball home from seven metres after Kai Havertz beat the offside trap on the right flank and squared an inch-perfect pass to the Bayern Munich forward.

Armenia, who beat Iceland 2-0 earlier yesterday, are at home to Romania on Wednesday while Iceland visit Lichtenstein in the group’s other fixture.

Denmark turned on the style as they thrashed hapless Moldova 8-0 in their World Cup qualifier to top Group F, with Kasper Dolberg and Mikkel Damsgaard both scoring twice against the nation ranked 177th in the world.

Coach Kasper Hjulmand made 10 changes from the Danish side that defeated Israel 2-0 away in their opening qualifier as only goalkeeper Kasper Schmeichel remained in the team, but it made little difference as they quickly dismantled the visitors. The win leaves the Danes top on six points.

Moldova have one point from their first two matches.

Spain striker Dani Olmo snatched a 2-1 win away to Georgia in their qualifier with a stoppage-time strike from outside the area to kick-start his side’s efforts to qualify for Qatar 2022 after a sluggish start.

Georgia thrilled the 15,000 fans in the Boris Paichadze Dinamo Arena when 20-year-old winger Khvicha Kvaratskhelia fired them ahead two minutes before halftime after his side had coasted past a passive visiting defence.

Spain were on course for their first defeat in a World Cup qualifier in 28 years until Ferran Torres levelled in the 56th, sliding in to send a Jordi Alba cross into the roof of the net after Alvaro Morata had failed to connect with the ball.

Luis Enrique’s side pressed for a winner right until the end and finally found one when Olmo let fly from long range and although goalkeeper Giorgi Loria got a hand to the shot it dropped just under the crossbar and into the net.

Georgia’s Levan Shengelia was then sent off moments before the final whistle blew to signal a first victory for Spain in Group B after they drew 1-1 at home to Greece last Thursday. Spain host Kosovo on Wednesday, while Georgia visit Greece.