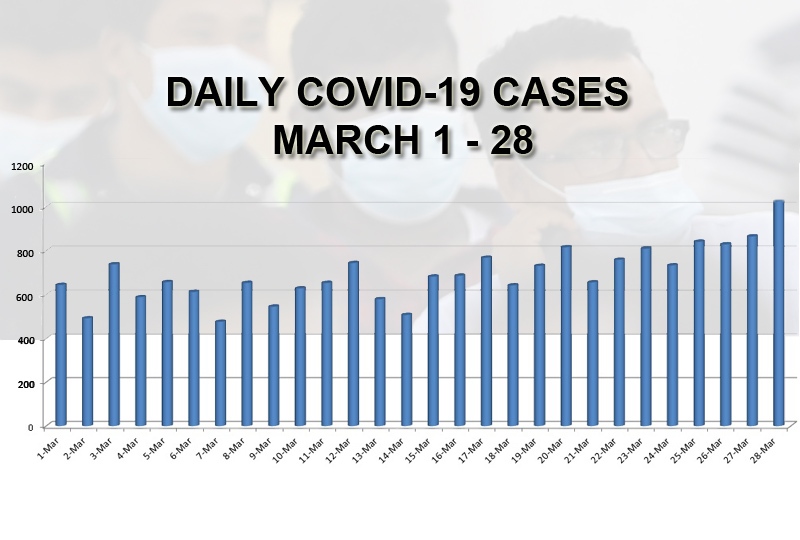 Bahrain registered the highest number of Covid-19 cases in a day on Sunday crossing 1,000

BAHRAIN registered the highest number of coronavirus (Covid-19) cases on Sunday since the first case was recorded in February last year, with a further 824 yesterday.

Tackling the current crisis will be high on the agenda of the National Taskforce for Combating the Coronavirus in the wake of a recent relaxation of precautionary measures.

The GDN learned that authorities have initiated new action such as restricting tenant mobility in buildings where positive Covid-19 cases had been detected.

Police cordoned off a building in Juffair on Sunday night, reportedly after three cases were traced in one of its apartments.

“We didn’t know anything about it until Monday morning when police officers below the building told us,” said an Indian expatriate tenant.

“We learned there were three cases on the third floor. No-one could come in or go out until the next day. Many could not get back home as they were stationed outside.”

Active cases were the highest on Sunday

Bahrain had similar measures in place last year during the early months of the pandemic when there was a sudden increase in Covid-19 cases. However, it remains unclear if the Juffair incident was one odd case or the measure was being reinstated widely.

With numbers spiking, the month of March has already pushed behind the record set in February on the highest number of daily cases and the amount of expatriates and local contacts who had contracted the virus. Fortunately, with only a day to go, the fatalities remain fewer than last month – 64 compared with 74.

The GDN reported earlier that the highest number of Covid-19 infections a day – 896 – was registered on February 13 beating the previous high of 841 set on September 16 last year.

The late summer number was also pushed further behind last Saturday, with 865 recorded cases, and brushed aside 24 hours later with cases up by 131 on the previous record.

Authorities are yet to announce the possible reasons behind the increase in cases, although ‘Covid fatigue’ has been suggested by global medical experts, as details from the previous week revealed five coronavirus clusters from family gatherings, infecting 56 from across 12 households.

“Our collective fatigue is making some people careless – one reason Covid-19 is rising sharply again,” one medical expert warned. “It helps to remind people that they have the ability to help get back to all those things we’re missing by helping reduce the number of cases by abiding by the vital precautionary measures.”

The rate of positive cases from daily tests also was the highest on Sunday which stood at 6.11per cent, ever since the Health Ministry started registering the data on February 9. An average of 13,500 tests daily was conducted last month, which went up to more than 15,600 this month).

The GDN earlier reported that aggressive testing was among the measures being adopted by the Health Ministry, as part of its ‘trace, track and treat’ strategy.

The ministry also conducts random testing on people, while public can call the health hotline 444 to get themselves checked.

Among deaths, the month recorded the youngest fatality of a 20-year-old expat woman who died on March 24. Of the 64 deaths until Sunday, 45 are citizens (25 men and 20 women) and the remaining 19 are expats (five women and 14 men).

The recovery rate stands at 94pc, one of the highest in the region.

Bahrain registered the first case of Covid-19 on February 25 last year, when a 28-year-old Bahraini school driver who returned from Iran tested positive.