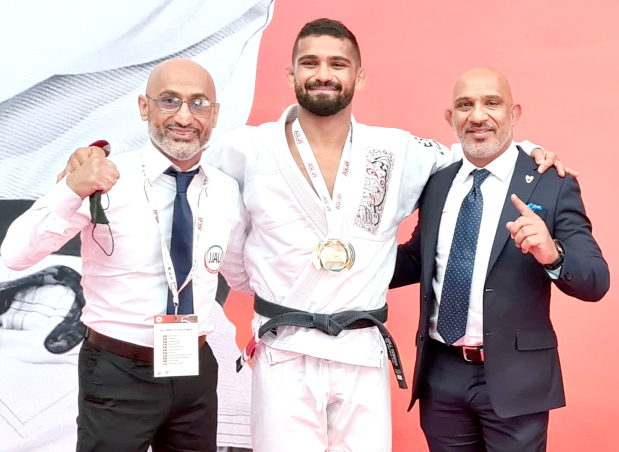 MARTIAL artist Ali Monfaradi is celebrating his golden glory yet again after the fourth Asian Jiu-Jitsu Championship title triumph in his sporting career ... coming hot on the heels of three gold in Croatia.

The 27-year-old Bahraini, who has more than 150 medals under his belt, had competed in five fights in the championship held in Abu Dhabi, three of which he ended by submission and the other two he won by points.

As Monfaradi, owner and head coach of Elements Jiu-Jitsu Academy, celebrated with his father Seena and uncle Reza, he told the GDN: “It is extremely humbling and such a wonderful feeling to know that after putting in the time, sacrifice and perseverance, I now have such a beautiful medal to represent all those hard times. This is my fourth Asian title and I don’t think I’m done yet!

“I am extremely grateful for the people of Bahrain, the leadership, the organisers, the federation, the team and of course everybody that helped me prepare for this feat, like Elements Jiu-Jitsu Academy. God bless you all!”

Monfaradi’s jiu-jitsu journey started at the age of 12. As an adult, he spent five years training at the Alliance Headquarters in Sao Paulo, Brazil, under legendary professor Fabio Gurgel and is the first and only Bahraini black belt competitor to have been trained by him.