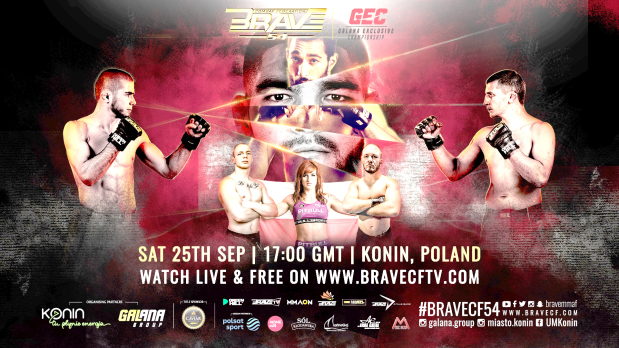 Three of Poland’s up-and-coming stars will be getting a fair share of the global limelight on September 25 as BRAVE Combat Federation visits the Polish city of Konin for the very first time.

Marcin ‘Bomba’ Bandel, Wawrzyniec Bartnik and Ewelina Wozniak will be donning the national colours of crimson red and immaculate white at the historic BRAVE CF 54, taking on the best international competition that the Bahrain-based promotion has to offer.

Bandel will make his much-awaited promotional debut on the card versus fellow debutant Magomed ‘The Tank’ Ayskhanov of Switzerland. ‘Bomba’ has been in the sport for more than a decade and has a wealth of fight experience under various organisations on his resume.

Moreover, he has competed against some of the best fighters across the globe and has amassed a stellar 19-7-1 overall record. With a solid background in Brazilian jiu-jitsu, the 31-year-old native of Pabianice, Poland directed his career path to BRAVE CF by signing an exclusive multi-bout contract this past August.

The man standing in his way to accomplishing a successful maiden appearance is Ayskhanov, a Swiss super welterweight who owns a spotless 7-0 slate.

Meanwhile, Bartnik (6-1) has a tall order in front of him as he is scheduled to test the mettle of France’s Axel Sola, who put the organization’s 175-pound weight class on notice with a first-round submission of Kuitty Begaj at BRAVE CF 49: Super Fights last March.

Rounding up the list of Polish representatives is undefeated heroine Ewelina Wozniak (5-0), who battles Samin ‘Devil’ Kamal Beik of Italy in a three-round women’s strawweight encounter. Twelve other nations will be represented at the highly-anticipated event in Konin. It includes Amin ‘Fierceness’ Ayoub of France who defends his BRAVE CF Lightweight World Championship against Ahmed ‘The Butcher’ Amir of Egypt in the show’s headliner